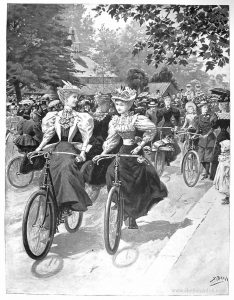 As I mentioned a few months ago, I attended the London School of Economics in the early 1990s and commuted every day by bicycle from outside of Greenwich to the Strand, about 10 miles each way.

No matter rain or shine, light or dark, I was pushing the pedals like a Victorian only 100 years late to the party. It was great fun although I was almost always the only cyclist on the road. In fact, come to think of it, I never saw another cyclist on the road back then, not even as I flew along with traffic above the banks of the Thames.

Crossing Tower Bridge in the rain at night on smooth metal grates in-between thundering lorries and at their speed is just one of the risks I learned to manage with skill and experience.

However, after six months I had to cut back and eventually stop riding due to the effects of harsh pollution on my lungs. The unregulated diesel fumes and particulates caused permanent damage and created the feeling of almost constant illness — a risk for which I tried but was unable to find any workaround. My GP literally told me to stop riding so far and so often because the London air was poisonous.

It is therefore amusing to me to read the brand new LSE report on the benefits of cycling that claims it can reduce illness.

Dr Alexander Grous of LSE’s Department of Management calculated a “Gross Cycling Product” by taking into account factors such as bicycle manufacturing, cycle and accessory retail and cycle related employment
[…]

I get the impression the report writers are not long-term cyclists as they leave out numerous other benefits. They definitely don’t read this blog. Even worse than the omission of the effects of pollution on cyclists is the omission of cycling benefits as a zero-emission transportation option. They also omit the benefits of social networking, as I’ve written about before in regard to an English propaganda movie. And the report omits the resilience of cyclists to natural disasters, as documented after the Japanese Tsunami; bicycles work without fuel supplies, fair roads, electric grids…they are the most effective form of transportation for national security and resilience to infrastructure failure.

It’s great to see cycling catch on in England but perhaps the greatest point of all is that England was full of cyclists after WWII for the reasons I mention above. Their decision to follow the US model of the automobile was a huge mistake if you run the numbers.

Thus, I find the LSE report a great start but embarrassingly weak analysis. Can they really directly attribute better health to cycling or is it just a correlation related to an overall lifestyle or even culture (e.g people who buy bikes already are healthy)? I would have added a long list of direct health and security benefits to the LSE report from cycling (e.g. zero emissions) to the gross product as well as call out the massive losses and costs since the decline of the last English cycling boom in the 1940s. Finally, I might even have tried to explain why cycling fell out of style.