It’s been a while since I mentioned the Konza and security so I thought maybe it’s time for an update. Often when Kansas comes up in conversation I hear either one or two responses from Americans:

Yes and yes, but no.

First, the political and historical relevance of the Wizard of Oz and its secret story are definitely related to Kansas. I mentioned it in 2006 and noticed a lot more interest in it after the financial crisis of 2008.

US political historian Quentin Taylor, who supports [Littlefield’s 1964] interpretation, says: “There are too many instances of parallels with the political events of the time.

“The Tin Woodman represents the industrial worker, the Scarecrow is the farmer and the Cowardly Lion is William Jennings Bryan.”

The Wicked Witch of the West is associated with a variety of controversial personalities, chief among them the industrialist Mark Hanna, campaign manager to President William McKinley.

In this scenario, the yellow brick road symbolises the gold standard, the Emerald City becomes Washington DC and the Great Wizard characterises the president – and he is exposed as being less than truthful.

The little dog doesn’t really have any significance (despite some suggesting Toto represents a teetotaler) once characters are framed in 19th Century deflation and depression, with a struggle between populists and industrialists (e.g. the 99% and 1%). That is why no one knows where Toto is.

Second, I have not yet written very much here about my impression of the terrain. So here’s a good example of why flat may not really be flat. This is a photo I took a long time ago. Notice what it does to your focus. The Konza landscape was formed from glacial runoff into giant valleys. Barely hidden beneath the tallgrass are rocks and boulders. 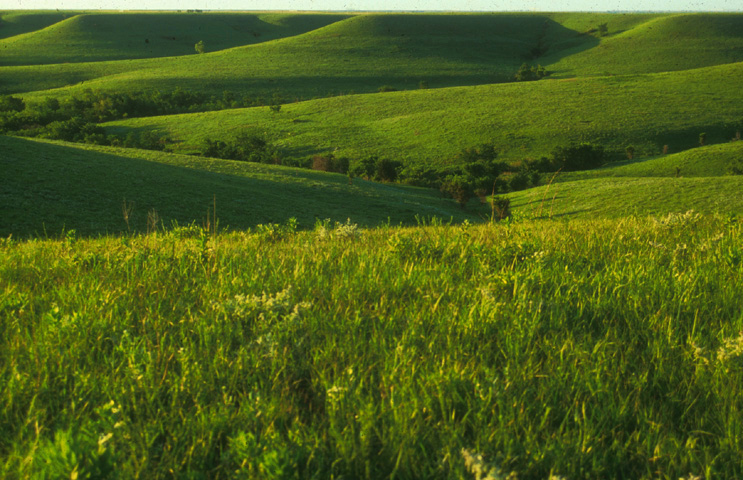 At first glance it may seem to be an endless green space or a flat top. The trained eye soon realizes the open space of a tallgrass prairie belies billions of interesting data points. You might not believe it at first but snow-on-the-mountain is right there, in front of you.

Hills are formed from an inverse effect. What you see through a little window at 70 mph could be a trick on your eyes; easy to focus only on the flat top with some blur below. But take a back road that tries to conquer the elevation change or slow down and let your eyes soak up the view. When you stop you will find an incredible diversity of life at the micro level.

It’s similar to the ocean. You can stare accross the sheer expanse of it through a window and see the emptyness. Or you can ride a wave and slow down to observe life below peak elevation. If you let the data in, you might be amazed.

Bison sampling data on the Konza. Photo from KEEP