Most Americans probably think of Memorial Day as a time for remembering all those who gave the ultimate sacrifice while serving in our armed forces. It was observed every year on May 30th from 1868 to 1970, and then became a federal holiday on the last Monday of May (as with today, the 27th).

Perhaps some wonder what Memorial Day was like before May 30, 1868? Obviously there were federal holidays and armed forces earlier so the answer is…it’s a trick question.

Nothing formal came before 1868 (unless you count things like blacks decorating graves of Union soldiers in 1865), because the day was established specifically to commemorate those who died to preserve the Union against an expansionist war of aggression started by pro-slavery “foreign” militants.

Unlike the federal Thanksgiving holiday established by President Lincoln in 1863, meant to bring Americans together, Memorial Day was to commemorate those who fought on one side.

Does that sound harsh? When I say there was aggression by “foreign” militants against America, I am speaking of those former Americans who openly renounced their citizenship in favor of using guns to perpetuate and expand westward the enslavement of humans.

We’re talking here about Americans who most decidedly fought against their own country, who wanted to perpetuate a King’s tyrannical precedent they believed was an inherited right from colonial-monarchist times (a false interpretation of history on their part, since the King’s corporations starting colonies were attempting to ban slavery, but that’s a post for another day).

All around the world by the late 1820s slavery was being widely abolished, including parts of America (in the great agrarian state of New York slavery was abolished on Independence Day, 4th of July 1827).

Yet some Americans simply could not give up a love of pre-1800s tyrannical practices and even chose to renounce their citizenship before they would renounce slavery. They set about in the 1830s silencing dissent and forcing slavery into new western territories. It was as if England’s 1833 Slavery Abolition Act didn’t mean anything to some in the former colonies, let alone England’s Slave Trade Act 1807 which made the purchase or ownership of slaves illegal within the British Empire.

America no longer was within the British Empire, so it also came up with its own Act of Congress in 1807 that outlawed importation of slaves. That Act really targeted only three states (South Carolina, Georgia and Louisiana), the ones that purposefully had undone a 1770s revolutionary American ban on importation of slaves.

Basically it was some hard-core American white supremacists who weren’t going to give up slaves. While so many other countries of the world were banning slavery, America was strangely engaged in harsh militant terror tactics, murdering those who even dared to speak about winding down human trafficking.

Lincoln in 1838 described the widespread fear and terror of being killed by slaveholder mobs:

Thus went on this process of hanging, from gamblers to negroes, from negroes to white citizens, and from these to strangers; till, dead men were seen literally dangling from the boughs of trees upon every road side; and in numbers almost sufficient, to rival the native Spanish moss of the country, as a drapery of the forest.

A quick recap of what Lincoln was referring to:

The absurdity of Jackson’s role in this is perhaps best explained as white’s doing violence against blacks was seen as their duty to keep the peace, murdering abolitionists a form of keeping the peace, whereas anyone calling such obvious atrocities out was blamed for upsetting the “peace” in a tyrannical white police state as it murdered with impunity.

And notably after Lincoln’s speech…

I find a lot of people have no idea what conditions in America were like after the 1831 uprising and dark days of the Gag rules, so here’s an excerpt from slaveholders themselves describing widespread murder and torture of anyone black or caught speaking of abolition: 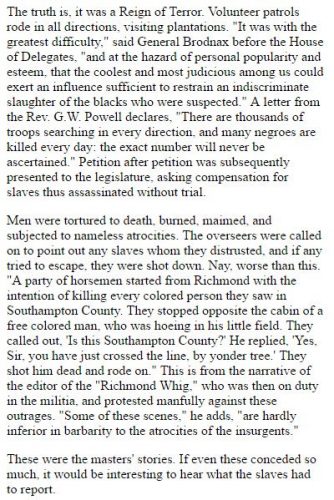 A final-ish tipping point to this condition came in 1859 when slaveholders believed their execution of openly abolitionist John Brown served as proof they could murder American citizens and face no real resistance, as long it was claimed slavery was being defended.

That assumption proved wildly false. Increasing numbers of Americans, particularly in Kansas, were now openly protesting slavery 30 years after the world had largely abandoned the practice…and so certain militant groups then chose to abandon America and start a war with it.

At this point everyone under threat of torture and murder by pro-slavery militants wandering unchecked around America had little choice but to rise up and defend self and their Union of states from what had become “foreign” forces.

Perhaps most famously foreign was General Lee, who went to West Point and then torched his American citizenship in order to prove a disastrous bumbling leader of enemy forces, and who never bothered to regain his papers. He died a relatively unpopular and isolated traitor to his country.

Lee’s epitaph probably should be here lies the man who advocated enslaving Americans when he wasn’t killing them, and late in life said he regretted the latter.

After the Civil War many white supremacists tried to hide their General (pun intended) ambition to perpetuate tyranny over country. Someone came up with catch phrases like “both sides”, used to passively argue how terrorists in America could be treated as equals to their victims.

This kind of dog-whistle not only is a page from history, it still can be found in fiction-based monument/attractions that have been erected by white supremacists, who even go to the trouble of inventing Civil War battles that never happened:

Even to this day it thus is important to remember Memorial Day was established in 1868 for one side only: soldiers of the United States who sacrificed their lives to put to end 30 years of terrorism, by crushing a “rebellious tyranny”, winning the Civil War and emancipating slaves.

Anyone commemorating pro-slavery soldiers on American Memorial Day is basically asking to lay a wreath for its enemies, against a united and free nation.

Perhaps that sounds harsh, yet here is how it was phrased on May 5, 1868 in the original “Memorial Day Order: …the cost of a free and undivided republic.”

And a year later, Colonel Fisher’s Memorial Day speech gave “praise those who saved the nation…from greed of gain” 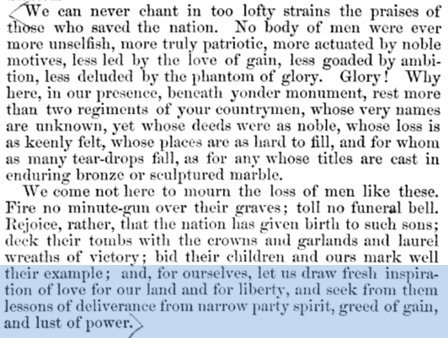 Those are the origins of Memorial Day.

Things have changed quite a lot since then, clearly. So here are just a couple examples of attempts to change its meaning:

Woodrow Wilson restarted the KKK in 1916 under his “America First” Presidential campaign and then in 1919 gave a Memorial Day speech (his last speech ever) where he asks Americans to commemorate more than just the re-union of the country, setting a precedent to distract from its clear origins: 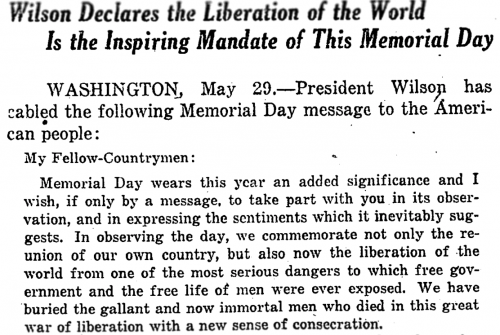 Eight years later in 1927 police were trying to block a tyranny-loving militant mob from violently disrupting/protesting a Memorial Day parade that was “dedicated to the soldier dead of the United States”.

Notably arrested was a 21-year old Fred Trump, for being among the nearly 1,000 black-shirted fascists and white-robed KKK who violently attacked 100 New York policemen. 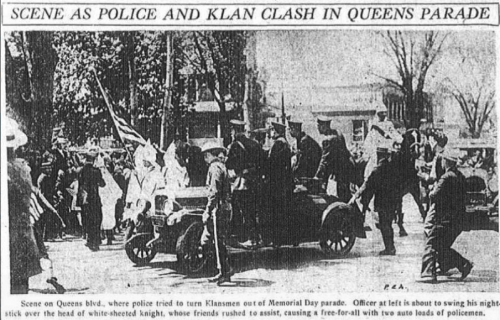