There’s a new first-person account in the New Yorker of some cultural differences between cycling in Holland and America:

Angela van der Kloof, a cycling expert and project leader with the Delft mobility consultancy Mobycon, told me, “From a young age in the Netherlands, we’re trained to take note of others. Not by a teacher but by the way we do things. I think we are very much used to physical negotiation.” Dutch people live in small houses, ride on crowded trains, and generally jostle against one another—the Netherlands has the sixteenth-highest population density in the world. Navigating complicated traffic situations, calmly and systematically, came naturally to our neighbors.

The key to this story is actually how Dutch women had the power to organize and campaign for protecting children from being murdered by people operating cars:

With cars came carnage. In 1971 alone, thirty-three hundred people—including more than four hundred children—were killed on Dutch roads. A number of organizations, including a group named Stop de Kindermoord, or Stop the Child Murder, began agitating to take the streets back from automobiles.

Contrast this story with America, where cars are treated like guns and operators are allowed to commit indiscriminate murder as an expression of an individual’s power over society, which Next City has explained in qualitative examples:

Morgan stayed in the intensive care unit for another month. For the first two weeks, the doctors weren’t positive she would survive. By the end of it all, medical expenses totaled more than $500,000.

“I was scared to death,” says her husband, David Morgan.

His fear would soon turn to anger when he realized that local police had no interest in pursuing charges against the woman who nearly killed his wife. After the State Highway Patrol’s investigation concluded that there were no grounds for felony charges, the district attorney also demurred from pressing charges.

“As far as the state of Mississippi goes, you could be an armadillo hit on the road, and the state treats you just the same as a… cyclist,” Morgan says.

What the New Yorker article about cycling in Holland misses entirely, ironically, is that the density of crowds cited by those living in Holland is not a sufficient ingredient on its own. Next City explains this using NYC quantitative data. Clearly NYC is an American city where people also are used to physical negotiation:

Consider crash data from New York City, which has installed more than 350 miles of bike lanes. There were 14,327 pedestrian and cyclist injuries in 2012 as a result of vehicle crashes, but police cited only 101 motorists with careless driving, a rate of less than 1 percent.

The actual difference is thus not growing up in density, but rather the levels of political engagement by women.

Cycling historically has been described as an independence movement for women, which should put male-dominated legislative action impeding people cycling in its proper perspective. Also women cyclists in America tend to be more at risk from cars and thus more likely to design safety infrastructure, as drivers put them more at risk:

“What we found was that female cyclists had a significantly different experience riding than the male riders did. … Female riders tend to have more aggressive interactions with drivers than male riders did.” …researchers found — no surprise — that protected bike lanes offered the best protection. Cars stayed an average 7.5 feet from cyclists cruising along a bike lane separated from traffic by bollards. No bike lanes, more close calls.

A campaign like “Stop de Kindermoord, or Stop the Child Murder” emphasizes the rights of children to live free from harm by adults in cars. America is about as likely to see a campaign like that succeed as elect a woman President instead of a man repeatedly accused of harming children for his self-benefit.

Don’t forget, America remains the only country in the world that has failed to sign the Convention on the Rights of the Child.

Holding cars accountable for killing cyclists and pedestrians would be like Epstein going to jail decades ago for harming children, yet instead he was seen free and partying freely with the White House Occupant.

The bottom line is that the safety of roads is about political power. That is why putting on helmets is the wrong answer. When cycling below 12 mph, which is the vast majority of commuter cyclists, the right answer is to place responsibility of safety upon those operating heavily armored machinery.

In a world where others may be harmed by their actions, machine operators must be accountable. If you think this is foreshadowing the problem of holding drone owners responsible for killing people, you are right.

Let me say that again, 98% were in accidents with motor vehicles and a whopping 83% died with helmets on. Do you see the problem?

California, with far less density than NYC or Holland, repeatedly has opposed helmet laws and for the right reasons (same as in Holland).

He also said studies have shown that motorists drive closer to cyclists with helmets on, and that helmets only reduce minor injuries, not fatalities. “Bike helmets are padding; they’re not armor,” he said.

Cars are armor. If cyclists put on armor, they’d be a car.

Not only do helmet laws decrease cycling by a significant amount, they do not show any real decrease in the death rate. In other words, data repeatedly shows how helmets impede cycling and thus make it less safe for the vast majority of cyclists.

Exceptions do exist and are important: habitually unsteady high-risk riders such as children and racers. These exceptions are easily handled, however, such as requiring helmets to compete in a race where contestants will gladly abide for the chance of winning.

The right formula is encourage more cyclists operating at speeds averaging below 12 mph in physically separated lanes, with NO adult requirement for helmets, and strict accountability for those who operate heavy (i.e. dangerous) machinery in the midst. Protecting the vulnerable shouldn’t be that difficult to figure out for our streets.

The fact that Holland has effectively already done it (as well as Denmark, Sweden, etc.) means America is running out of excuses to justify murderous drivers, as “A view from the cycle path” has illustrated quite simply:

The answer to the problem of cars killing cyclists is directly related to how the American political system allows care and consideration for vulnerable populations at risk of being harmed due to a weapon authorization for individuals.

We need to be intelligent enough to start the move away from these American headlines: 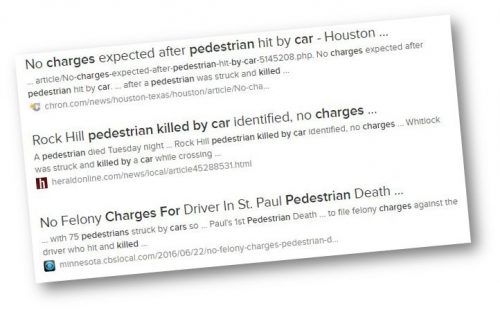 Which means sites like Twitter need to recognize the harm from its role in peddling active calls to use cars to murder non-whites, and how this propaganda relates to “Republicans want to legalize running over pedestrians“: 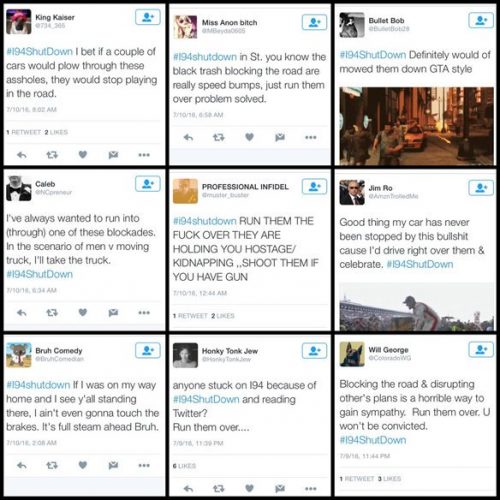 All that being said, there recently have been at least two notable exceptions to the sad state of weaponized roadways in America: