The US National Park Service calls it…

The Smithsonian calls it…

…one of the worst atrocities ever perpetrated on Native Americans… Sand Creek was the My Lai of its day, a war crime exposed by soldiers and condemned by the U.S. government. It fueled decades of war on the Great Plains. And yet, over time, the massacre receded from white memory, to the point where even locals were unaware of what had happened in their own backyard. 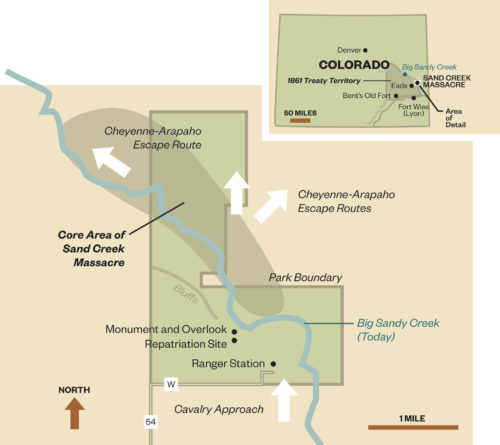 In brief, on November 29, 1864 at Sand Creek, Colorado a small peaceful non-threatening group of Southern Cheyenne and Arapahoe Native Americans (who believed they were under protection of US forces) were suddenly and brutally massacred at dawn by approximately 700 of “Colonel John Chivington’s Colorado volunteers”.

Chivington had fashioned himself as a “Christian” soldier. It was under his orders that nearly 150 Native Americans were tortured, murdered and badly mutilated. Three-fourths of his victims were innocent women and children butchered alive as they tried to escape. His men took human parts as “souvenirs” and tried to convince the American public such genocide was righteous.

WARNING: Explicit Depictions of the Massacre

In reality the treacherous “Colorado volunteers” viciously hunted down the Native Americans, often small children or elderly, and set fire to their villages despite white flags flying above.

Soldiers slashed open a pregnant woman’s belly, one soldier reported, “and took the Cheyenne child out and cut his throat.”

And while all this obviously criminal conduct of Chivington and his troops eventually was documented by whistleblowers and investigated, the Sand Creek Massacre Foundation points out no criminal charges were brought by the US against him!

Here is the kind of language found in the Joint Committee on the Conduct of War (Source: Hearing Before the Committee on Indian Affairs United States Senate One Hundred Tenth Congress First Session on Indian Health Care Improvement Act), which clearly documented depraved crimes of the US military:

Having full knowledge of their friendly character, having himself been instrumental to some extent in placing them in their position of fancied security, [Chivington] took advantage of their in-apprehension and defenceless [sic] condition to gratify the worst passions that ever cursed the heart of man,

Instead, an outstanding soldier in the US Army who had served under Chivington in Colorado and refused the genocidal orders and testified against Chivington was then assassinated by Chivington’s followers…

Silas Soule was later also murdered in Denver, but not before writing a graphic letter describing the atrocity to superior officers, gaining attention in Washington D.C.. Despite the ongoing Civil War, three federal investigations followed, in which Soule and other participants testified, resulting in condemnation of Chivington’s actions as an unjustifiable massacre. Cheyenne and Arapaho people honor Silas Soule today, and many say that were it not for his and others’ heroism, many Cheyenne and Arapaho descendants would not be here today.

Interesting to note that Soule has not been celebrated far more widely and regularly. He was already an American hero before he was placed under Chivington. Some speculate the US Army refusal to condemn Soule for disobedience was a passive criticism of Chivington.

As a former conductor on the Underground Railroad, and veteran of the fight in Kansas against domestic terrorists, Soule had helped lead the fight in Colorado to protect it from annexation by slaveholders (something the self-obsessed and thieving Chivington tried to claim credit for doing).

Soule stood against Chivington at a crucial moment. In today’s terms, he was a staunch defender of America against corrupt leadership: 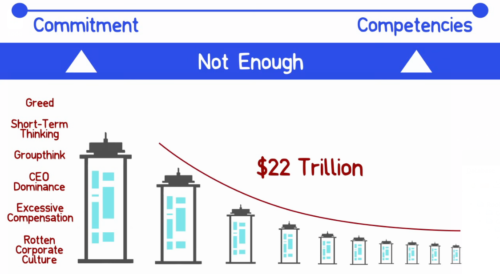 The military, created to block slaveholder invasion, was being fraudulently converted (arguably Chivington had lost his remit before he gave orders) into a greedy for-profit extermination campaign waged illegally against Native Americans.

The complete and genocidal removal of the Arapaho and Cheyenne peoples from eastern Colorado by the very forces established to prevent removal of Americans from Colorado was peak hypocrisy and Soule documented it as such.

I saw two Indians hold one of another’s hands, chased until they were exhausted, when they kneeled down, and clasped each other around the neck and were both shot together.

Soule was the true American hero in every sense.

His biography is a must read, albeit a tragedy among many successes in security (from jail-breaks to masterful tactics in battle) that were pivotal in American history.

He tried to stop and liberate John Brown, yet failed.

He tried to stop and convict Chivington, yet failed.

A low-budget movie recently was made about Soule, which really shows just how strangely unknown he is despite his amazing story.

The massacre makes for gruesome reading, and this history of the US might seem ancient. However, it also reminds me of what recently was exposed under the Reagan administration, given its documented 1982 brutality towards native Americans.

Reagan’s support led to a fundamentalist Christian taking control of Guatemala in a March 1982 coup d’etat. General Efrain Ríos Montt seized power and announced a policy of “rifles and beans” — either eat beans quietly in obedience to dictatorship or be killed by rifles. In response Reagan described him as “a man of great personal integrity”.

…more than 600 Indian villages in the Guatemalan highlands were eradicated or occupied by the military. The slogan “rifles and beans” meant that pacified communities would get “beans,” while all others would be the target of army “rifles.”

It makes sense to me that streets, schools, parks, etc be named for Soule. Why aren’t they?

…it is people like Soule and Cramer who truly deserve to be remembered through monuments and memorials, and can be a source for a different kind of historical understanding: one based not on abstract notions of justice and right, but upon the courage and integrity it takes to breathe life into those virtues.

Undoing the systemic erasure of American heroism (e.g. hiding Grant’s Tomb and erecting pro-slavery monuments) starts with promoting widespread awareness of great people like Soule who gave so much to their country and humanity.