The news right now is about a widely respected and beloved leader in the US Military achieving the highest award for valor.

Yet I can’t help but notice an important side-story.

In “Witness to War” Puckett clearly is using his current platform to point out (in a gripping combat story) what a terrible leader General MacArthur was.

General MacArthur had seen Truman the 8th of October and told the President the Chinese are not coming into North Korea… he obviously was wrong about that […] I just couldn’t understand why things appeared to be easy to MacArthur.

This has to mean something big. Puckett is very purposefully throwing MacArthur into the dustbin of history, as any literate historian would too.

…historians have reassessed Douglas MacArthur—not just his command style, but particular decisions he made, and particular episodes from his long and controversial career. In modern evaluations, more often than not, “Dugout Doug” comes up short. […]

How did MacArthur blunder so badly? How could he miss more than 300,000 Chinese soldiers? Once the intelligence finally came in loud and clear, he and his staff of sycophants continued to dismiss it, suppress it, or willfully misinterpret its import. In so doing, they recklessly put tens of thousands of American and other United Nations troops in mortal danger. The result was catastrophic: One of the worst defeats, and one of the most ignominious withdrawals, in American military history.

It was, in some senses, a repeat of his debacle at Bataan. Only in this case, MacArthur had been outwitted and outflanked by a guerrilla army with no air force, crude logistics, and primitive communications, an army with no tanks and precious little artillery. As David Halberstam put it, MacArthur had “lost face not just before the entire world, but before his own troops, and perhaps most important of all, before himself.”

All of this happened because MacArthur was almost criminally out of touch with reality.

I can feel the bitterness in tone when Puckett speaks to the camera about the 8th of October tension of 1950 between MacArthur and Truman, in an otherwise completely neutral and factual retelling of a near-death battle.

Here’s how it was reported to the public around the time Puckett was on the ground thinking MacArthur was dangerously clueless.

The Medal of Honor for valor in the Korean War really gives us a chance to listen to a detailed retelling of American history from a soldier who by all accounts has the highest integrity, who is neutral in tone and ultimately who makes others perform better… and who is clearly pointing out MacArthur was a clueless disaster.

Reminds me of the Trump family repeatedly invoking MacArthur as their hero for being a “not nice guy”. I am pretty sure they mean the same sort of thing that historians might refer to as MacArthur’s extremist evangelical white supremacist beliefs.

As late as 1950 [MacArthur] commented to a visiting American churchman: “Please send ten missionaries for every one you now have in Japan. We must have ten thousand Christian missionaries and a million Bibles to complete the occupation of this land.” […] MacArthur’s conviction that democracy and Christianity were inseparable necessities for the rebirth of Japan was readily accepted by many chaplains.

Another fun history fact is — since we’re talking about MacArthur’s “not nice” evangelical views — that the Aryan Nations white supremacist domestic terrorist group was inspired by Colonel William Potter Gale (a close aide to MacArthur who also was a “Christian Identity” pastor).

Gale spent his time after WWII back in America to spread what the SPLC calls “a militia-type antigovernment movement that promoted racist and anti-Semitic views.”

Just to emphasize the point one more time… “MacArthur was almost criminally out of touch with reality” and his incompetence helped spawn veteran-led violent Christian domestic terrorist groups in America.

And that reminds me of a bunch of obviously clueless American flag officers who just published a completely tone-deaf fear-mongering disinformation letter (or as Steven Metz, professor at the US Army War College, called the letter: “unhinged, delusional and, frankly, stupid”).

Truman was right and probably should have fired MacArthur sooner. 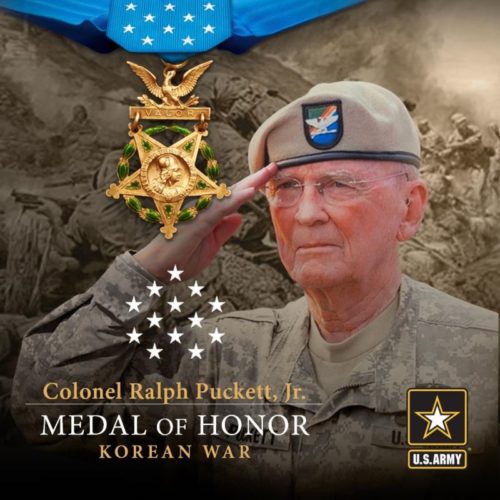 Though the Army had only been desegregated by President Harry Truman two years prior, Lt. Puckett selected two African Americans to serve in the 8th Army Ranger company. Why? Because they met the standards and to quote, ‘we were all Americans, the blood was the same color: red,’ Lock said on a call with reporters ahead of Friday’s ceremony, adding he later did the same for women.

Puckett was everything that General MacArthur was not, and America is hopefully at long last able and willing to recognize the significant differences. Puckett now becomes the oldest Medal of Honor Recipient, as Charles Coolidge (June 18, 1945 award) very recently passed away at 99.