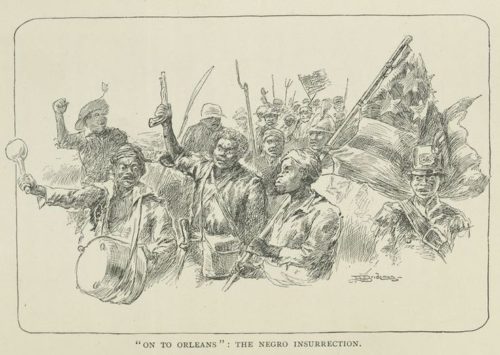 Sunn M’Cheaux of Harvard explains — in a brief history lesson on accents within a longer video — that American slaveholders tried to force learning English to surveil and thereby prevent rebellion of their slaves.

As he lays out in the video, there were many native languages among the Blacks kidnapped and forced into American concentration camps. Slaveholders worked hard to mismatch and divide people to prevent any two slaves from speaking with each other except using English (so they could be surveilled and freedom quashed).

Such a plan for racist dominance and control over Blacks (surveillance capitalism as a symptom) ultimately backfired, however. Diverse languages among the slaves evolved into a whole new “creole” that their oppressors struggled to understand.

This common example shows how a Gullah phrase would look versus an English equivalent:

Kumbaya, as I’ve written about before in terms of American surveillance history, is alleged to be a Gullah phrase for “come by here” — an encoded expression of Black liberation theology.

The Gullah Geechie people are descendants of people from the rice-growing region of West Africa, who were forced into the rice plantations (concentration camps) of South Carolina and Georgia. Those who could escape tyrannical American abuses headed across the border at that time, towards the freedoms given to them under Spanish or French monarchy (even British monarchy by 1800s was abolishing slavery, so life in America was unquestionably the worst).

While Florida was still part of the Spanish empire the Gullah who arrived there built their own settlements and began to prosper, away from the white nationalist extremists running America. A series of wars were even fought to preserve these Black freedoms, which had the effect of further scattering the Gullah across North America.

More precisely General Andrew Jackson in 1818, a long-time white insecurity leader with the life-long objective to steal and destroy Black prosperity in America (e.g. note his abuse of Black American veterans in 1815), illegally invaded Florida to murder the non-white population there.

The video above lays out some of the important Gullah achievements against American tyranny, and the outsized role of John Horse:

Since Mexico figures prominently here, crucial to understanding the “Remember the Alamo” phrase popular in America is that it had always been a racist white insecurity response to Black liberation and freedom… in Mexico.

The slave rebellions of the early 1830s thus were when white immigrants (like the assault by Andrew Jackson into Florida two decades prior) pushed white militancy upon Mexico (state of Tejas). White settlers were trying to replace existing freedom with a tyranny, ultimately with the aim to expand slavery.

So when a white militia occupied the Mission San Antonio de Valero (a ruin called “the Alamo” because Spanish for cottonwood) it was precisely to violently force a white nationalist state into being against the rising Gullah freedom movement (the foundation story for white police state of Texas).

It’s shocking that today most Americans are more familiar with the gross disinformation spread about the Alamo and Texas as a whole, while few if any are taught about the Gullah Wars of the exact same period that show what was actually at stake.

That probably has something to do with the fact that American children are spoon-fed very North-Korean sounding “underdog” missives about the bogus heroism of white slaveholders fighting to expand slavery. The Civil War, like the Gullah Wars that preceded it, was to stop tyranny spreading.

Saying “remember the Alamo” or throwing around associated racist salutes are like stupidly trying to teach that expansion of slavery should be promoted as if it was a good thing. Here’s what it really means:

And, just like any tyrant would be expected to do, a Texas state representative has introduced legislation to censor the mention of slavery being one of the causes of the Texas Revolution (it was the primary cause).

Thus, Gullah history is interesting to consider when people talk about surveillance technology and oppression even today. It almost seems that soon the only safe way to teach real facts about places like Texas, Florida or Georgia (states where Blacks were free until they joined America) might be to return to roots and practice Gullah.

Whit Diffie says in a preview for the RSA Conference Cryptographer’s Panel that increasing communication decreases freedoms, and we’re only a decade away from total freedom loss.

I would argue this is a false choice fallacy, and the Gullah history above hopefully shows why. Could the Gullah communicate securely while also being free? Indeed, by increasing their communication they realized greater freedoms than before.

As Tom Wolfe wrote in “The kingdom of speech“…

Physically, [the human] is a sad case. His teeth are baby-size and can barely penetrate the skin of a too-green apple. His claws can’t do anything but scratch him where he itches. His stringy-ligament body makes him a weakling compared to all the animals his size. Animals his size? In hand-to-paw, hand-to-claw, or hand-to-incisor combat, any animal his size would have him for lunch. Yet [the human] owns or controls them all, every animal that exists, thanks to his superpower: speech.

Gullah Atlantic Creole is a superpower? Now that’s an American history story I would love to see kids learn.