The Ford Pinto engineering design flaws are infamous, thus it has been the car most associated with preventable fire risks until… TESLA (updated July 2nd):

The driver, identified as an “executive entrepreneur”, was initially not able to get out of the car because its electronic door system failed, prompting the driver to “use force to push it open,” Mark Geragos, of Geragos & Geragos, said on Friday. The car continued to move for about 35 feet to 40 feet (11 to 12 meters) before turning into a “fireball” in a residential area near the owner’s Pennsylvania home. “It was a harrowing and horrifying experience,” Geragos said. “This is a brand new model… We are doing an investigation. We are calling for the S Plaid to be grounded, not to be on the road until we get to the bottom of this,” he said.

Hot off the desk of the un-professional PR department at Tesla is the related important story that their cars have a serious acceleration bug forcing a massive recall:

The 300,000 cars being flagged for a critical safety failure are at risk of sudden acceleration due to problems with Tesla’s self-proclaimed “autopilot” software.

Yes, you read that right, the safety recall is because the very product feature that was supposed to make these cars safer is actually making them more dangerous.

An even deeper read to this story is that Tesla is pushing software updates to cars using an allegedly insecure supply chain. Given that the bug appeared in the first place, what is to prevent an even worse bug from being deployed to cars on the road at any time and in any place?

While some obviously want to celebrate the ability to remotely deploy update code, it may be wishful thinking to believe the update will not make things worse (Tesla’s 2.0 “autopilot” was infamously worse at safety than its 1.0 release).

Indeed, the “Plaid” model in flames above is using a “new version” of the battery for the S/X, which obviously is unsafe.

Tesla seems to regularly exhibit deploying bad code (the official insurance rating now has a “P” for poor safety in Tesla engineering) and pushing the cost of its own failure onto others.

Also worth mentioning is that Tesla’s PR system has been promoting acceleration as its top feature at the very same time that acceleration issues (coupled with handling and braking issues) are being cited in recent deaths of its customers.

This reads to me like Ford promoting the heating capabilities of its Pinto while its customers are dying in gasoline fires from preventable design defects. 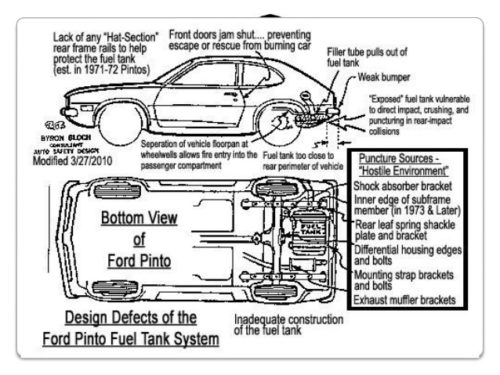