I found these images amusing. Usually you see state leaders in mile-long motorcades of gas-guzzling armored limos, but Bush and Putin were caught again by a Reuters photographer driving themselves in an electric car (Rice and Ivanov in the back) to the G8 Summit in St. Petersburg. If I’m not mistaken, that’s a vehicle produced by GM: 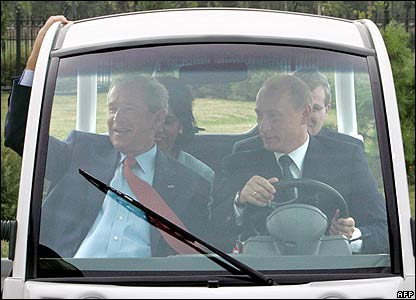 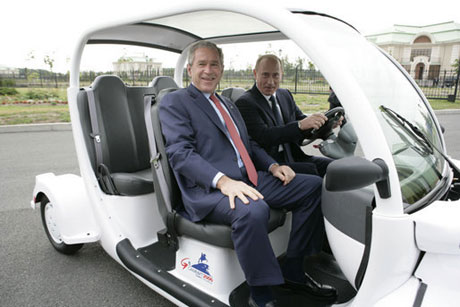 Does this car make me look concerned?

The funny background to these “Pathway” vehicles is that GM was strategically placing them in states (California) that threatened to enforce zero-emission standards. It’s a fair point that these things would replace the nasty small or even two-stroke utility carts found on limited-access low-speed pathways (like college campuses), but calling them part of a “fleet” of passenger vehicles was a calculated stretch to avoid the cost/benefit of real innovation in their vehicles.

I say they were actually part of a plan of attack by GM to undermine the intent of the zero-emissions mandate:

See the irony in the photo yet? Bush helped kill-off the progress towards zero-emissions vehicles in the US, as some remember:

In 2001, GM, Daimler-Chrysler and the Justice Department filed an injunction against CARB arguing the ZEV Mandate violated the federal government’s right to control fuel economy. A district court in San Francisco agreed and GM cancelled the EV1 program.

I think the deadline might have been aggressive, but the real bottom line was that giant American car manufacturers wanted their base of consumers to want giant vehicles with high margins made to be more efficient, rather than smaller, more-efficient vehicles with low margins. Regulations to protect the manufacturers from liability, but no regulations that protect consumers from externalities. Short-term guaranteed profits over long-term risk.

Anyway, I guess it’s easy to want to kill a project that your supporters never believed in from the start, but then to parade around the G8 summit in the project that you killed, that’s just odd.

Something tells me that the lack of progress (as opposed to change) in Detroit has everything to do with an overly-conservative approach to the world that is at odds with the G8. The changes ahead are not only inevitable, but the longer they take to adjust to the new paradigms the more its going to rattle their cages. Europeans, South Americans and Asians are designing small, light and nimble electric vehicles while GM is…in denial.

Here’s a wonderfully insightful admission from GM Communications about the movie called “Who killed the Electric Car?“:

Although I have not seen the movie or received an advanced DVD as others have from the film’s producers, I can tell you that based on what I have heard there may be some information that the movie did not tell its viewers.

Haven’t seen it, don’t want to see it, don’t care what consumers say. I wonder if they’ve seen “Thank you for smoking“? These guys are first-rate spin-doctors. No need to see a movie to send out a response about what it does or doesn’t say in the movie. Classic. Here’s my favorite part:

GM is co-developing with DaimlerChrysler and BMW Group a new two-mode hybrid system for passenger vehicles. This new two-mode hybrid technology will debut next year in a Chevrolet Tahoe full-size SUV, which will offer a 25 percent improvement in combined city and highway fuel economy when joined with other GM fuel-saving technologies.

Really? We’re supposed to be wowed by a full-size SUV with 25% improvement in mileage? Let’s see, that factors to a change from 14-18mpg to 18-22mpg, and it depends entirely on “other GM fuel-saving technologies”. Stop the presses. Hold the line. Wait, I forgot to mention that they also boast of a “Saturn VUE Green Line hybrid this summer, which will offer the best highway fuel economy of any SUV (EPA estimated 32 mpg)”. It’s like 1975 all-over-again. I’m getting 38+mpg with my biodiesel engine today in a full-size wagon, and they’re calling 32mpg the future? Where are all those supposed billions in research dollars really going?

Seems to me that mileage for American vehicles went down over the past twenty years, which has the nasty result of fooling us into thinking a slight increase back to prior levels is some kind of improvement. Did you know that the Ford Model T engine ran 25-30mpg in the early 1900s? For what it’s worth it also only took 93 minutes to assemble and had a max speed of about 50mph. Not bad for an affordable neighborhood vehicle, eh? The recent announcement that after significant investments in technology a brand new Corvette can only achieve 28mpg (on the highway, downhill, with a strong tailwind and the clutch depressed, foot off the gas pedal) is truly a sad sign of the times. A hybrid-car has been proven to totally annihilate the Corvette on the line and still manage to keep superior efficiency. Change can be good, but GM seems both unwilling and unable to make the sort of real changes that will get us to a better vehicle today.

I’m not terribly optimistic either that GM has announced an alliance with DaimlerChrysler (and BMW group) to finally figure out how to make hybrids. After all this is the group of companies that killed the California zero-emissions mandate, right? Are they really trying to figure out hybrids to achieve low-emissions?

And finally, I have to say I’ve heard enough about fuel-cell vapor-ware already. Just another five years? If you think electric cars have hurdles ahead, fuel-cell is just getting started. Which means they are not much more impressive than the E85 engine. The fact is that mileage on ethanol is significantly lower than gas, so corn-based fuel makes a nice story to rattle around (especially in corn-market states) but in reality a Tahoe on E85 only gets 10-14mpg. No thanks. Diesel makes far more sense since you can take ethanol and mix it with used vegetable or animal oils to make biodiesel for a diesel-hybrid that gets 100+ mpg. And that’s not to mention “soybean-derived biodiesel gives more bang for the buck, yielding a 93% return on the energy investment used in its production, compared with a 25% return for ethanol” and “Biodiesel…could reduce emissions by 41% compared with regular diesel fuel. Ethanol replacement of gasoline could reduce greenhouse gas emissions by 12%”, according to a report in the LA Times. Since biodiesel can be made from just about any kind of oil (including waste oil from restaurants) the input model is far more sensible than a single-source like corn. It’s a technology available right now and the country is more than ready to convert to this low-emission high-power domestic fuel. In fact, I just filled up at a regular gas station down the street with B99 tonight. 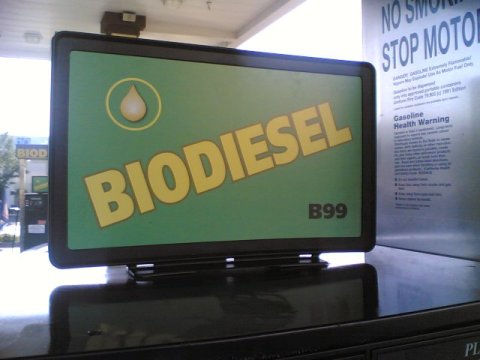 GM, where’s your passenger hybrid-diesel engine and why isn’t it at the G8?